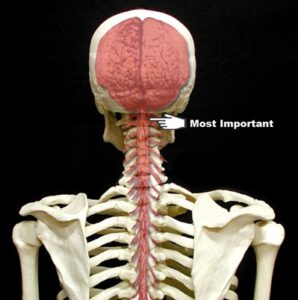 Chiropractic essentially deals with the interference of nerve transmission from the brain due to distortion (misalignment) of the spinal column (vertebrae = individual bones that make up the spine).

However, most chiropractors in the world, including those in the United States, where it originated, use what is called a “mixer” approach, which is characterized by a medical approach that combines a variety of therapies, including massage, acupressure, ultrasound, taping, needles, and cold compress therapy, that are considered effective in treating and alleviating symptoms of disease.

This is a medical approach. This is why we also refer to the mixer as medical chiropractic.

On the other hand, straight (pure, traditional) chiropractic is the one that only aims to adjust the subluxations of the spine.

Specific Upper Cervical Chiropractic is a straight type of chiropractic that only seeks to cause subluxations in the upper cervical region.

Straight Chiropractic does not deal with the “symptoms” you complain about like a Medical Chiropractic or chiropractic physician do. It is your “natural healing power” that responds to your symptoms.

A good state of nerve transmission from the brain leads to the maximum utilization of natural healing power.

In chiropractic care, Specific Upper Cervical Chiropractic focuses on the effects on the medulla oblongata, which is located in the upper cervical region at the bottom of the brain stem, the center of life support, based on the fact that the functions of the body are regulated by the brain through the nervous system.

The medulla oblongata is the center of the autonomic nervous system that regulates the heart, respiration, vascular system, and internal organs such as the stomach.

The medulla oblongata is also a very important part of the spine that gives commands to the muscles that support your spine.

The characteristic of Specific Upper Cervical Chiropractic is that the distortion of the spine other than the upper cervical area is considered as a compensatory action (Compensation) that the body (organism) instinctively takes in order to stabilize the head as much as possible in the center.

Therefore, there is absolutely no pushing or snapping, twisting of the spine to correct the problem as is commonly done by chiropractors.