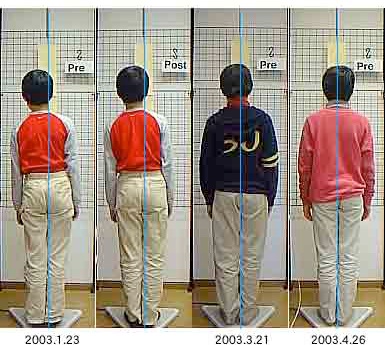 This child had been feeling back pain for one year. He could easily bend forward (flexion) but he felt much pain when bending backward (extension).
(In his case) the backbone did not extend easily. When first examined on January 23,2003, we could observe that his head had shifted to the left. After the adjustment, there was no remarkable change but the line of the backbone showed some improvement by expanding a little.
When coming to our office the following March and April, his posture had considerably improved, we didn’t find subluxation and so adjustment was not necessary. Afterwards, the boy’s condition recovered smoothly and without any problems at the time of April and his posture adjusted itself by his body’s natural healing power (innate intelligence).