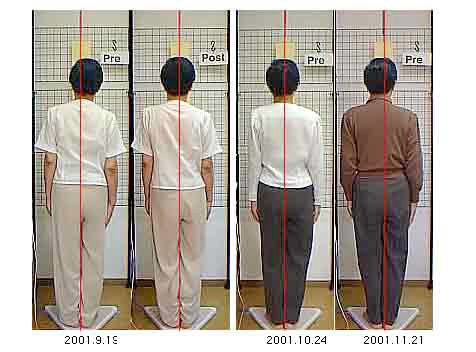 This patient felt pain on the backside of her lower limbs caused by sciatica. She was given a first adjustment on Sep.19. About one month later Oct.24, her tilting head and body moved to the centerline by her natural healing power within her body naturally while spending her daily life.
In November she became able to walk without feeling any pain. Before she felt pain in her left ankle only by sitting in the train. Now that has improved greatly. Right shoulder inferiority almost became even naturally. Only one adjustment was given her from September to November because no subluxation exists, but her natural healing power from the brain through the nerve system treat or cure herself. This is also the good example how chiropractic works!