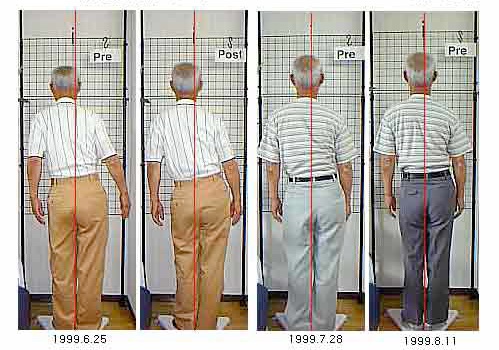 This patient went to hospital, received bone setting treatment, acupuncture but that didn’t improve his condition so he came to our office so we could check his spine. Looking up was difficult and lying on his face was barely possible. It seemed that he had been eating lying down. First adjustment was given on June 25,1999. Still looks stay the same position even after adjustment, but head move to the up right position.
Both numbness and pain were reduced when we met him again on July 28. He could also walk longer distances.
On Aug. 11, there was an improvement in the numbness of his right leg. Afterwards, it completely disappeared even though the patient admitted to some tension in his waist. We can see that still changing posture to the normal position by innate intelligence within. Specific Upper Cervical Chiropractor never treats or cures the disc hernia as an effect, but correct the upper cervical subluxation as a cause.