Chiropractic concentrates its efforts only on problems of neurotransmission from the brain resulting from a distortion of the spine. (Vertebrae are the unit bones of the spine)
Nevertheless much of the chiropractic performed worldwide including in the United States even  where is the place of origin can be defined as “mixed chiropractic”. Mixed means the use of various kinds of therapies to treat diseases and relieve symptoms like massage, shiatsu, acupuncture, moxibustion, taping, supersonic waves, icing, traction, manipulations, etc. Contrary to mixed chiropractic, Straight Chiropractic adjusts only subluxations of the spine. Specific Upper Cervical Chiropractic is one of the variations of Straight Chiropractic, focused on the subluxation of the upper cervical vertebrae, namely C1 and C2 trying to fix “dis-ease” not disease. 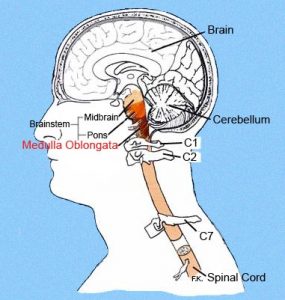 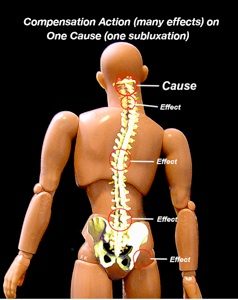 The spine houses protects the spinal cord and nerve roots. Messages from the brain must pass through the neck in the spinal cord through C1 and C2 cervical vertebrae first. This is the area of the spine where subluxations occur first. It is a very important area because it is the closest to the brain. If C1 or C2 are subluxated and there is interference in the nerve communication from the brain, the quality of body functions will be lowered under normal levels. So, the Specific Upper Cervical chiropractor confirms the existence of a subluxation by the several tests , and if there is, he or she will adjust it and then leave it alone, to let nature keep its course. 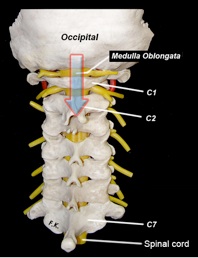 How do we find subluxations in the Upper Cervical area?

(Please note that in the U.S.A., chiropractors take X-rays to verify the condition of the spine. In Japan, the situation of chiropractors has not been legislated so far, so we are not allowed to take X-rays at this moment. Patients who already have X-ray films of their cervical areas should bring them with them upon their first visit. That will help us understand the patient’s situation.

In Specific Upper Cervical Chiropractic, there are several tests for analyzing the personal subluxation pattern of its own then judgments the existence of the subluxation.

We usually do 5 tests:

Meaning of each test

The blood vessels in the whole body are controlled by the brain and nervous system. The medulla oblongata (brain stem), where C1 and C2 are located is the control center for that function. In the case of a subluxation here, we can usually see a decrease in the skin surface temperature in this area when compared to the other side or the area below, not always but almost.

The figure below is a measurement of the surface temperature of the both side of the spine from the neck down to the waist using another instrument Tytron C-3000. We have access to various instrument models like Fig.01 that give us numerical values to make graphs. 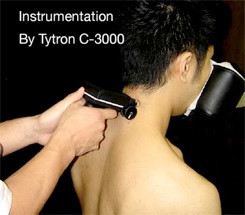 The advancement of technology and science provides us with instruments that get more and more precise.
This is one of the numerous instruments we use in our offices. It displays computer graphics. The data gathered by this instrument is not only shown the graph but also converted into a distribution of colored bars for an easy interpretation that also allows the patient to understand easier of his and her condition.This instrument provides us with three different angles of analysis of the original subluxation pattern in detail. 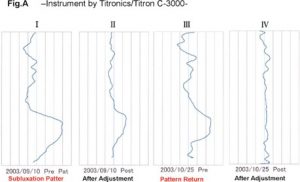 Fig. AⅠ(subluxation pattern) and Ⅲ(Pattern Return) displays the right and left temperatures in the shape of waves letting us conclude to a subluxation.Fig. B lets us see the different temperatures using an array of shades of color. (From green to yellow to orange to red. Red color shows largest temperature differential.) 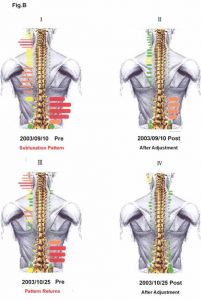 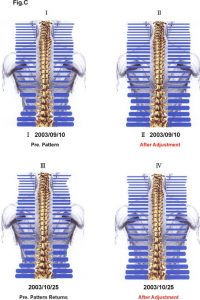 subluxation Pattern, Ⅱis after adjustment,Ⅲ 2003/10/25 is next visiting which shows again subluxation returns. As you see this example that when subluxation again occurred at the upper most area, pattern almost returns to the original subluxation pattern like Ⅰas shown above three ways. Ⅳ is indicating after adjustment with no subluxation, the control center of the blood vessels to have regained the normal function or to be regaining the process to the normal. We can understand that as the extent of the subluxation is improved, in addition temperatures differential disappears and entire balance is also improved. In case of next visiting and indicated the same result of the examination after adjustment or no return to the original subluxation pattern, we can know there is no subluxation, this means no necessity of adjustment.
As mentions following in the section 4. “Posture Analysis”, when there is a great difference in color, and the blue bar is very narrow, this suggests that there is a secondary obstruction of the neurotransmission in the lower spine (Effect area, below fig.). This is due to compensation in the lower area (Effect area, beow fig.) of the spine to a displacement of the upper cervical area.

Looking at this example from a chiropractic point of view using Fig.B and C excepting Fig. A graphs as you may understand easier, the subluxation in the upper cervical area seems to cause a reduction of the temperature on the right side of C4 to C6. There is also a temperature decrease at lumbar vertebrae L2 to L4, especially left side. However, this is only compensation to the displacement in the upper cervical area. Therefore, when the displacement of the upper cervical vertebrae is corrected, the vasomotor center in the medulla oblongata returns to normal, providing a normal blood stream to the whole body. Temperature changes in the lower area of the spine are a natural phenomenon. There is a relation between the upper and lower areas of the spine and when a displacement in the upper area of the spine is corrected, the position of the head returns to normal, the muscles supporting the spine (antigravity muscles) regain their normal power. This correction is the result of an improved neurotransmission from the medulla oblongata resuming its normal function. These temperature changes observed on the test results can be interpreted as an indication that changes in the upper cervical area cause a “distortion of the spine” and impede the “natural healing power” of the human body.

Occurrence of subluxation changing posture causes tension in some muscles. Muscle tension also causes changes in the position structure. These two factors work interdependently. An unbalanced stance can produce the distortioning of the position such as low shoulder, low ilium and affect other joints. A leg or an arm shorter than the other one is usually the effect of an unbalances stance.
Therefore after adjusting the upper cervical subluxation, the patient’s posture will improve because the muscular tension will ease after the flow of neurotransmission has become normal. The frame will return to its normal position and the feet and arms will also become or close to symmetrical. 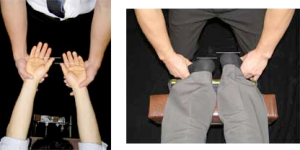 Muscles are attached to the body structure and keep its position by themselves. However, as C1 and C2 move away from their original position, the muscles react and are pulled to one side. So palpation of muscles helps us understand the direction of C1 and C2 and that movement is called “listing” by the chiropractors. Each person has his or her own listing. Listing is just like a password people use to access their personal computer, or like a door key of your car or home only can open by it and represents the direction of the misalignment using specific letters of the alphabet. Just like a key opens one door, this listing is the patient’s own key to better health.
There are two kinds of palpation. Muscle palpation and bonny (bone) palpation. If we know the direction of the misalignment by muscles palpation, then doing the bonny palpation for confirming the muscles palpation, if it is correct or not.Bone palpation (static and in motion) tells us the patient’s range of motion (limitation of the articulation) of the spine.
When there is a subluxation, a portion of the spine is locked or the range of motion is restricted from its normal motion. An upper cervical subluxation especially affects not only the lower spine, but also other articulations that are further from the spine, the hip joints, knee joints and ankles. Therefore, people suffering from problems at these joints (excluding those that need surgery or some other medical support) can be cured naturally by upper cervical adjustment. 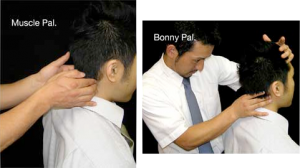 The head is supported by the first cervical vertebra called “Atlas C1”. The skull rotates right or left together with the atlas using the odentoid of axis as a pivot.
When we look at a lateral view of a standing posture(no picture shown here), the gravity line of the body goes through the C1 lateral mass, which is the contact point between the skull condyle and the C1. So, if C1 moves out of line (misalignment), it produces a change in the skull position, which becomes an abnormal position. When the head is positioned away from the center of the body, it becomes unstable. As a result, the brain, through the nervous system, tells muscles of the lower spine include the pelvis to make compensation as a secondary misalignment. The result is an unbalanced posture like Fig. Picture P-A View, not Lateral view here. Usually, when subluxation exists, posture also shows the tendency to return. So, by checking your posture regularly, we can look for a pattern of subluxation. 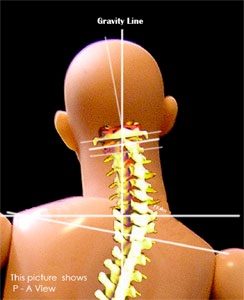 Distortion of the body makes strain of skeletal-muscles. These are causes a lateral shift in gravity analysis. Subluxation of the upper cervical produces gravity shift to lateral side and backward. There are caused by straining of anti-gravity muscles, that is concerned about keeping good posture with gravity force.
As our standing posture is adjusting by the brain using mucles through the nervous system,
if subluxation is removed, the transmission from brain becomes properly that changes the muscular functioning better and as a result short legs and a short hand becomes even due to the posture changes.
And so, the center of gravity moves to the forward and center or opposite side (like figure shows) as muscular strain can be taken.